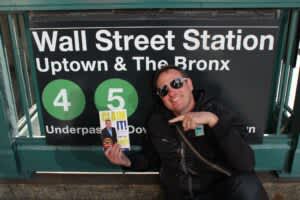 CLAIM IT! – Wall Street has been for years!

Well, to be honest, I actually wanted to be an architect – but didn’t get the marks.

My brother-in-law, who was a property developer, saw that I liked construction and that I was good at maths so suggested that Quantity Surveying might be a good fit.

But, for those of you too old to remember the late 80’s, interest rates were at 17% and property development ground to a halt.

So like many other hordes of Aussies I thought I’d see the world and went backpacking through Europe.

On this journey I quickly learnt that working for the minimum wage was not the future I aspired too.

One day while walking to a fairly crappy part time job on a dark winter’s day in London, I calculated that the cost of travel, a packet of cigarettes (I’m an ex-smoker – one of those annoying ones) and a can of coke was equivalent to my daily take home pay and right there and then I decided it was time to come home.

I was 22 and thought I was TOO OLD to get into the property industry. (Now I get CV’s from 22 year olds and think they are kids!)

But I did go back to Uni.

And about halfway through the year I saw some ads around Uni call for a “Cadet Quantity Surveyor for Washington Brown”.

Wow, I thought that sounds like a big company.

So I ran around campus and ripped down all the flyers that had been spread throughout the Uni.

Surprisingly I was the only one that turned up for the job.

More surprisingly was that Washington Brown wasn’t a big company – It was a one man band run by Mr. Antony Brown.

I was desperate to get into the industry – so I offered to work for a year for free.

Which I did and can now say proudly that I own the company and we are far from a one man band!

That’s my story – What’s yours? I’d love to hear in the space below.