The Depreciation Party Is Over The depreciation party is over…

In an attempt to “reduce pressure on housing affordability” the Government has announced dramatic changes to the way depreciation is claimed on property.

Let’s start with the good news:

1.  Any existing investment properties purchased (contract exchange date) prior to May 9 2017 are not affected (unless they were not income producing in the 2016/2017 financial year).

2. Commercial, industrial and other non-residential properties are not affected.

3. Capital works deductions have not been affected. This means you will still be able to claim depreciation on the structure of the building provided it was built after the 16th of September 1987. And you will still need a Quantity Surveyor’s depreciation schedule to do so.

Now that we know what isn’t affected, let’s look at what has changed…

The government will limit plant and equipment depreciation deductions to outlays actually incurred by investors. In essence, unless you as the buyer had physically purchased the items – you can no longer depreciate them. This is a massive change to what you can claim – there by reducing investors’ cash flow.

You see, under the recent changes, I suspect the developer will be deemed to have bought the plant and equipment – not you. 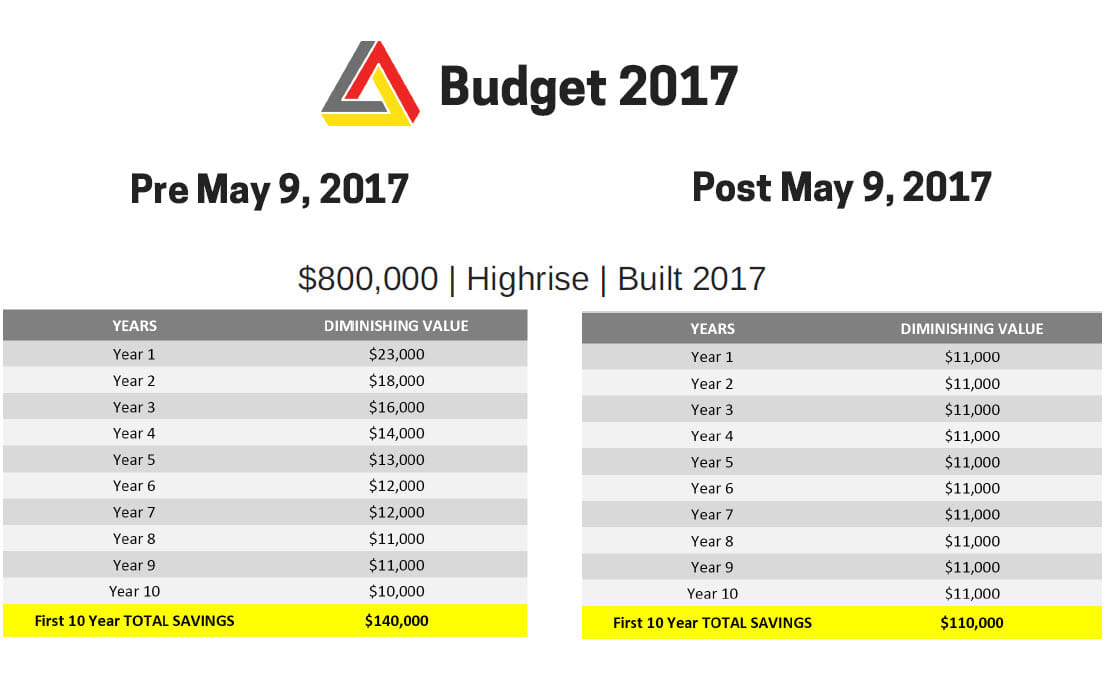 So in summary: if a residential property was built prior 1987,and has not been renovated – there will be no depreciation claim.

This is very rare as most pre-1987 built properties we inspect have had some renovation carried out.

If built after 1987 – only the construction costs can be claimed.

Whilst there is still much uncertainty regarding the specifics of this budget’s depreciation-related changes, one thing is crystal clear: If you own a residential investment property and haven’t had a depreciation schedule prepared, now would be a good time to get a quote!

Developers, Project Marketers and Property Sales Agents – If you are selling property and using depreciation numbers that include plant and equipment: STOP NOW! This element needs to be removed from the selling equation, at least until the legislation is finalised.

Here is why I think this is dumb policy.

The proposed changes are being made to “reduce pressure on housing affordability.” In my opinion, it will have the opposite effect for 3 reasons:

Whilst I believe housing affordability is a major issues, this appears to be policy on the run…so the Government can be seen to be targeting property investors, when changes to negative gearing could have been more effective.

I will provide a further update once the legislation is finalised.